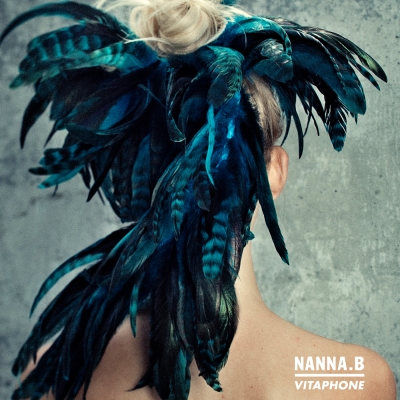 Danish singer Nanna.B is ready with her debut Vitaphone, a 12 track album, all created throughout 2011 and early 2012. The title is inspired by a Basquiat painting, and consists of the two words “Vita” and “phone”, meaning “life” and “sound”. As Nanna writes in the album booklet, Vitaphone:

“is a testimony as to where i’ve been, where i am and where i’m going; South, North, inside, outside, inner space, outer space, somewhere in between and somewhere out between”.

Most tracks are with live instrumentation, but a few more electronic and some all-vocal tracks also contributes to the 40 minute musical journey, where the more experimental sides of soul is also being explored. This is a result of the collaboration with the main producer of the album, Damp, and with an ambition to create an album sounding like a soul concert taking place on a trip to the moon, the two spend most of 2011 in an home build analogue studio in the countryside of Denmark. Besides Damp, you will also find productions by Stacks and Rewolmer, plus features from Chicago based mc Diverse and danish Nappion

Because of all the good feedback from blogs and listeners around the world, Nanna has decided give the entire album out for free in the first week of it´s release. Get it from the player below.

If you wish to support the album it is also available in iTunes stores world wide and on beautiful ocean-blue vinyl LP. Enjoy and share the music!

This entry was posted in Audio, Downloads, News, Releases. Bookmark the permalink.

This site uses Akismet to reduce spam. Learn how your comment data is processed.